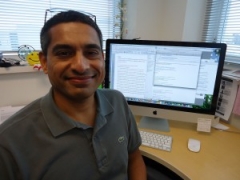 Chandrasekhar currently is a professor of Biological Sciences at the University of Missouri.

Anand Chandrasekhar was born in Bombay, India, and received undergraduate degrees in Biology and Electrical Engineering from BITS Pilani, India. He came to the University of Iowa (UI) in 1987 because of his interest in the work of Professor David Soll, with whom he earned his Ph.D. degree in Biology in 1994.

Chandrasekhar said coming from India to the UI, and Soll’s Lab in particular, was an exciting experience, with profound impact on his scientific and social skills. He fondly remembers everything from football Saturdays to the Mill Restaurant seminars and describes Iowa City as “the perfect college town.” Chandrasekhar met his wife while attending the UI, and they have two children. He currently is a Professor of Biological Sciences at the University of Missouri where he joined in 1998, following a postdoc at the University of Michigan. He and his family continue to visit Iowa City when traveling to see his wife’s family in Iowa. He said, “it always feels like I am coming back home.”

It was one of Chandrasekhar’s undergraduate mentors that “lit a spark” in him to read broadly in cell biology and genetics. That’s when he encountered Soll’s “fascinating” research, decided to go to graduate school, and as the saying goes, “the rest is history.”

Chandrasekhar credits “all the Biology faculty, especially Soll and Wu,” with molding him into the scientist that he is today. His lab studies the mechanisms by which neurons migrate within the vertebrate nervous system. His work provides insight into brain disorders like Lissencephaly, and may help improve stem cell therapies for neurodegenerative disorders, such as Parkinson’s and ALS. In addition, the Chandrasekhar Lab is investigating the neural circuits that control feeding with potential for a better understanding of the metabolic and hormonal regulation of food intake, which has wide-ranging impact on human health.