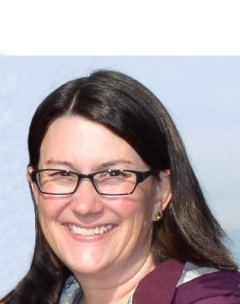 Stoltzman is currently between scientific positions while volunteering at the Seattle Aquarium where she educates visitors about the local marine environment.

For Carrie Stoltzman, life at the University of Iowa (UI) was all about balance.

“For me, the university and the city together was a ‘just-right’ place,” she says. “Not too big but not too small, quiet enough to focus on your studies but connected enough to explore the fine arts, performances, and ped mall events; bright and intellectually stimulating in the Biology Department on one side of Iowa Avenue but dark and no-frills at Joe’s on the other side of Iowa Avenue.”

Stoltzman, originally from Howards Grove, Wisconsin, graduated from Gustavus Adolphus College in May 1990 and started work on her Ph.D. at the UI a few months later. She felt that the department would offer her a full, well-rounded education, because “the graduate program placed great emphasis on students’ understanding of a broad range of biological topics” and the labs examined complex subcellular and molecular questions in the context of the whole organism.

Stoltzman worked in Barbara Stay’s Lab, studying cockroaches. Stoltzman saw Stay as a role model for life at and away from the lab bench.

“As a mentor, she was a wonderful example of how to be scientifically inquisitive, to set and maintain high quality standards in work and in life, to balance work with play, to enjoy the work you choose to do, and to make time for morning tea,” Stoltzman said, adding that Joe Frankel, Gene Spaziani, and John Stefaniak were also important mentors.

After graduating in 1998 from the UI with a Ph.D. in Biological Sciences, Stoltzman worked as a postdoctoral fellow at the University of Utah, studying mammalian counterparts of Drosophila tumor suppressor genes in mouse ovarian surface epithelium. After this, she worked as a laboratory specialist at the Huntsman Cancer Institute in Salt Lake City for eight years before moving on to the University of Washington where she developed gene therapy components for a mouse model of muscular dystrophy. In 2012, Stoltzman worked at Groove Biopharma in Seattle until the company closed. Although she’s currently between scientific positions, Stoltzman enjoys volunteering at the Seattle Aquarium, educating visitors about the local marine environment.