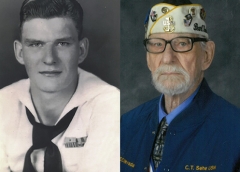 Sehe retired in 1990 after serving on the Biology faculty at Minnesota State University in Mankato, Minnesota, since 1967.

LETTERS OF REFLECTION: THE AMAZING JOURNEY OF DR. CHARLES SEHE FROM PEARL HARBOR TO IOWA CITY AND BEYOND

Job prospects were bleak when Charles Sehe graduated from high school in Geneva, Illinois. So at the age of 17, he enlisted in the Navy. Sehe was stationed on the USS Nevada when the Japanese struck Pearl Harbor on December 7, 1941 and he witnessed ships around him go down in flames. He served on the USS Nevada during other key battles - the assaults on Iwo Jima and Okinawa as well as the Normandy Invasion at Utah Beach. Sehe’s WWII experiences would remain with him throughout his life.

After the war, the GI Bill transformed Sehe’s life, allowing him to attend North Central College in Illinois and earn a B.S. in 1950. He started graduate studies at the University of Iowa in what was then called the Zoology Department, completing his M.S. in 1953 and his Ph.D. in 1957. Sehe was thirsty for learning and as he explains in a recent letter to the department, “Oh, it wasn’t ignorance that prolonged my stay at the UI, it was actually the free reign to take any courses of interest, beyond those required for graduation.” Sehe remembers walking over the frozen river to attend medical courses in the winter, avoiding the old, unsafe iron bridge and describes his time at the UI as “a ball of coronation.”

He benefited greatly from mentorship and guidance from faculty in the department and from members of the community. When his GI Bill benefits ended, Sehe worked for faculty in the department, including Robert King, Harold Beams, Eleanor Slifer, Emil Witschi, and Jerry Kollros. Sehe tended colonies of grasshoppers, rats, finches, and frogs. He also tutored an athletics student and worked as a lab assistant. He recalls with gratitude, “I sincerely admit that this depression-era kid, saturated with war memories, could not have completed his Ph.D. without the university’s generous work-study support.”

Sehe remembers Dr. Witschi as an excellent thesis advisor but notes that Dr. Kollros had the greatest influence on his life. As Sehe puts it, “Dr. Kollros shaped my life towards a career based on my own initiative and talents.” Kollros, whose family emigrated from Europe to America after WWI, also understood the challenges Sehe faced as a recently returned vet. When survivor’s guilt and the aftermath of combat made it difficult for Sehe to stay focused during lectures, Kollros lent a much needed listening ear.

In another letter Sehe reminisces, “I would catch up on my classes by serving as night librarian in the Zoology Library room. I do miss the midnight hours at Hamburg Inn #1 just across from the Zoology Annex. Many of us would quit studying about 11pm and go to Hamburg Inn #1!” Sophia, an elderly woman who worked the Hamburg’s grill, would often set aside a bowl of chili for Sehe during those lean years.

Sehe married Lillian Elaine Lysaght of Michigan in 1953. After completing his Ph.D., he taught at the University of Illinois, University of Cincinnati, and his alma mater, North Central College. From 1964 to 1967, he conducted research as a postdoc at Stanford University School of Medicine. He and Lillian returned to the Midwest in 1967, settling in Mankato, Minnesota, and raising five children. Sehe served on the Biology faculty at Minnesota State University, Mankato, until his retirement in 1990.

Sehe struggled for years with the devastation he witnessed during the war. Eventually, he found writing to be therapeutic. In 2008 he co-authored Battle Born: The Unsinkable USS Nevada BB-36 with Peter Wren and is currently working on a memoir. Sehe’s story is also preserved through interviews and archives housed at the Library of Congress as part of the Veteran’s History Project.

Sehe has received numerous honors as a WWII vet. He was commissioned a Kentucky Colonel in 2010 for his volunteer work to educate middle school students about WWII. He was also awarded the rank of Captain by Senatorial Recognition for his service on the USS Nevada. Sehe reflects that, “This 93-year-old gentleman’s homeward journey is near its end” but remains busy preparing to commemorate the 75th anniversary of the Pearl Harbor attack on December 7, 2016.