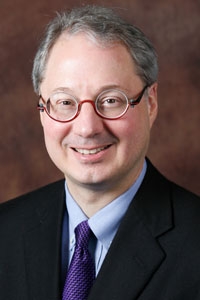 Clark Stanford is currently the Dean of the College of Dentistry at the University of Illinois at Chicago.

Dr. Clark Stanford came to the University of Iowa (UI) from Northbrook, Illinois, in 1979. Clark enjoyed the small town atmosphere and the friends he made while in Iowa City after coming from a large Chicago suburb. He graduated with a Bachelor of Science degree in Zoology (1984), D.D.S (1987), Ph.D. in Biology, and a Certificate in Prosthodontics (1992) - all from the UI. While working toward his degrees, he studied in the lab of his mentor, Michael Solursh, for both his B.S (1981-1983) and Ph.D. (1987-1992). He credits his father, who was a Biochemist, and Professor Solursh's mentoring support, for influencing him to pursue a career in oral health research. He also recalled former Biology faculty George Cain and Eugene Spaziani along with current Professor David Soll, as other individuals who impacted his career.

Dr. Stanford said his education "defines in many ways what I do on a day-to-day basis" as the Dean of the College of Dentistry at the University of Illinois at Chicago. Stanford was previously the Associate Dean for Research, Centennial Fund Professor, and Director of Clinical Research in the College of Dentistry at the UI. He also held secondary appointments in the Department of Orthopaedics and Rehabilitation (College of Medicine) and the Department of Biomedical Engineering (College of Engineering) at the UI.

His expertise area is implant dentistry with his main clinical research interests in implants, implant biomaterials, and dental materials. He is also interested in bone biology including biologically-mediated bone mineralization (implants), bone metabolism, osteoblasts, and isolating and characterizing human osteogenic cells. In 2006, he received the Board of Regents Award for Faculty Excellence, and in 2007, the Distinguished Scientist Award from the International Association for Dental Research. Dr. Stanford serves on the committees of several professional organizations including the International Association for Dental Research (IADR) and the Food and Drug Administration (FDA), and is a member of many others.