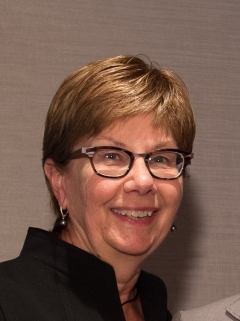 Dr. Magrane is currently a Professor of Obstetrics and Gynecology and serves as the Executive Director of the International Center for Executive Leadership in Academics at Drexel University College of Medicine.

When Diane Magrane was ten years old, her mother took her and her seven-year-old brother on a bus trip from Ottumwa, Iowa, to Spirit Lake to visit her father. Her father, who was a high school biology teacher, was studying for the summer at Iowa Lakeside Lab in Okoboji while pursuing his master’s degree in science from the University of Iowa (UI).

Several years later during her own Freshmen Orientation at the UI, Magrane recalls feeling overwhelmed at the plethora of courses available. Her father was standing next to her enrolling in the last of his courses for pursuing his Ph.D. in Science Education at the UI. He asked her what she was planning to study. Magrane responded, “writing.” He paused and said, “What science course are you going to take?” She remembered Professor Richard Bovbjerg from Iowa Lakeside Laboratory who was teaching Introduction to Biology, and so she replied, “biology.” Magrane went on to say, “That decision opened a career path that has made all the difference for me.” These were some of the remarks that Magrane made on June 13, 2015, during her acceptance speech when receiving the UI’s Distinguished Alumni Award for Achievement, one of many awards throughout her career.

Magrane earned her bachelor’s degree in zoology (one of the former names of the Department of Biology) in 1974 and a doctorate of medicine in 1978. “I was an 18-year-old aspiring poet when I arrived and a 26-year-old physician when I left,” says Magrane. An influential leader in women’s health and academic medicine, Magrane has made an enormous impact on the lives of academic leaders and students. She currently is a Professor of Obstetrics and Gynecology and serves as the Executive Director of the International Center for Executive Leadership in Academics at Drexel University College of Medicine.

She has improved medical education in many ways including implementing one of the country’s most innovative medical curricula at the University of Vermont College of Medicine. “I led a major curriculum change that applied genetics, ethics, and epidemiology to a contemporary understanding of patient care. I was able to pick up from what I had learned from David Soll in 1974." As an undergraduate student at the UI, Magrane worked in the laboratory of Barbara Stay, “who was a wonderful mentor and an inspiration to me as a scientist, gardener, and friend. I was privileged to study with professors who were making breakthroughs.” She continues, “Never underestimate the reach of the influence of this university; even a ten year old can see it. I’ve been a Saint Louis Billiken, a University of Vermont Catamount, and I’m now a Drexel Dragon, but I am always a Hawkeye.”

Learn more about Dr. Magrane on the University of Iowa's Alumni Association website at http://www.iowalum.com/daa/search/profile.cfm?ID=527