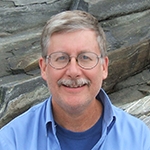 Eric Cole is currently a Professor of Biology at St. Olaf College in Northfield, MN, where he has been since 1993.

Eric Cole has lived in several states and large cities but currently resides in Nerstrand, MN, a town with only a population of 270! A native Iowan, born in Waterloo, Cole went back to his roots to receive his Ph.D. in Biology (1990) at the University of Iowa (UI) after receiving his Bachelor’s degree from Reed College (1978) and Master’s degree from the University of Washington (1983).

It was Cole’s mother who sparked his interest in science and nature. She allowed me “to bring all manner of beasts into our living room — everything from snakes, frogs, and snapping turtles to scorpions and praying mantis.” He went on to say that he learned to love the outdoors from his father who took him and his brother camping and on canoeing and hiking trips.

Cole was attracted to the UI after meeting a former Iowa graduate in Seattle who had worked in Professor Joe Frankel’s Lab. Frankel’s research on pattern formation in the ciliates was fascinating to Cole. Thus, it was Frankel who led Cole to the UI. He researched in Frankel’s Lab (1984-1990) and eventually became the last graduate student to study under him. Frankel retired on June 30, 2013, after serving over 50 years in the Department of Biology. Cole was recently back on campus to celebrate Frankel’s retirement. He credits his mentor for having the biggest influence in his career. “It was at Iowa, and because of Joe in particular, that I found the focus and commitment necessary to build a career in Biology.”

Cole calls the UI a special place because it’s where he met his wife, Kate, with whom he adopted two lovely girls, Atia and Liani, from China. Some of the fondest memories he recalls in the department include “Jeff Denburg roller skating up and down the hallways, the incredible tough exams of Gary Gussin, John Menninger’s ‘frogometers,’ John Stefaniak’s mellow and musical family, and the immeasurable kindness of Jim and Jenny Lin,” to name a few.

He is currently a Professor of Biology at St. Olaf College in Northfield, MN, where he has been since 1993.