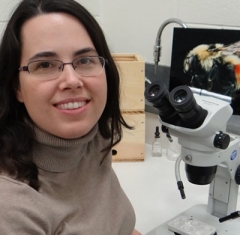 Hines is currently an assistant professor in the Departments of Biology and Entomology at Pennsylvania State University.

For Heather Hines, summers in college meant hours in the sun collecting bees on the prairie as part of her undergraduate honors research in Dr. Steve Hendrix’s lab.

“Dr. Hendrix did a great job easing me into research, first under the mentorship of a graduate student, and then in developing my own project,” Hines says. “He made me feel like an important part of the research team in his lab. Being part of this community was my most valued undergraduate experience. Dr. Hendrix taught me what a career in research science is about, preparing me for graduate school and beyond.”

In addition to working with Hendrix, Hines also worked in the labs of Dr. Barbara Stay in the Department of Biology, and Dr. Thomas Schmidt in the Department of Molecular Physiology & Biophysics. After graduating, Hines continued to study bees, focusing on the evolution of bumble bee species. She received her master’s and Ph.D. in entomology from the University of Illinois at Urbana-Champaign studying the evolutionary history of bumble bees. She completed her postdoctoral research at North Carolina State University focusing her research on the developmental genetics underlying butterfly coloration.

Since 2012, Hines has been an assistant professor at Penn State University, where she received a National Science Foundation (NSF) Early Faculty CAREER Award and continues her research on mimetic coloring in bumble bees. She and her partner Andrew Deans, an associate professor at Penn State, have two children, Vivian and Hugo Deans. Hines loves to travel, and her efforts to collect bumble bees have taken her to Turkey, Mexico, Malaysia, and Myanmar.

Hines reflected on her time at Iowa by saying, “The University of Iowa presented vast opportunities to find what interested me and allowed me to connect with like-minded individuals. The University of Iowa has a cozy, college-town atmosphere, a vibrant downtown, and great educational resources.”