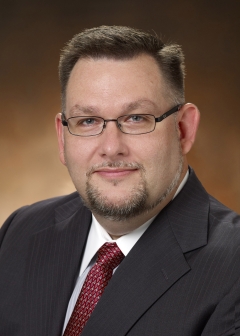 Renger currently leads drug discovery programs in neuroscience at Merck and serves as a member of the Aging Mind and Brain initiative (AMBI) External Advisory Board at the University of Iowa.

John Renger was a pre-medical student with aspirations to become a practicing physician when a meeting with Professor of Biology, Chun-Fang Wu, changed the course of his career forever.

Renger, originally from Ledyard, Iowa, was the first in his family to attend college. He studied in the department as both an undergrad and a graduate student, completing his bachelor’s in 1991 and his Ph.D. in 1997. After taking a course in neuropsychopharmacology, Renger wanted to start an undergraduate research project and approached Wu.

“That single meeting ultimately led me to rethink my career path from clinical practice to preclinical basic research,” said Renger, who worked with Wu from 1989 to 1997. “I spent the last two years of undergrad and 6 years of graduate school learning how to be the best scientist I could be with Dr. Wu’s help. I carry those experiences with me everywhere and use the tools he taught me every day in my own labs, even through today.“

Renger went on to complete postdoctoral work in Japan and at the Massachusetts Institute of Technology (MIT). Since 2001, he has worked for Merck, where he currently leads drug discovery programs in neuroscience. His research has led to the approval of Belsomra, a novel drug treatment for insomnia. In addition, his work has been a topic of multiple popular press articles, including “The Big Sleep” featured in The New Yorker. He also serves as a member of the Aging Mind and Brain Initiative (AMBI) External Advisory Board at the University of Iowa (UI).

Renger acknowledges his Biology degrees as his “gateway into a wonderful life and career” and adds that he would have never been able to accomplish all that he has without the training he received from the UI. He also credits the UI with his happy marriage to Dr. Xin Mu-Renger, D.D.S., who graduated from the College of Dentistry in 1999. Renger, his wife, and his two brothers hold a combined total of 6 UI degrees. He speculates that his two daughters, 10-year-old Abbigail, and 6-year-old Amanda, may also be future Hawkeyes.