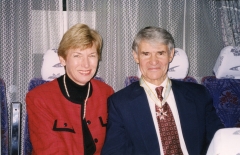 When Joseph Bagnara came to Iowa City in September 1952, it was just the beginning of a journey that would lead to many traveled roads, earning him international recognition while making lasting friendships. Born and raised in Rochester, New York, Bagnara received his Bachelor of Arts degree in Biology from the University of Rochester. During his senior year, he decided to attend graduate school and further study his interest in embryology.

“I was excited to receive acceptance into the graduate program . . . at the University of Iowa,” says Bagnara in his memoir, Unfinished Business: A Biologist in the Latter Half of the 20th Century.  “It meant both the start of a new life and the key to my future.” One of Bagnara’s professors at Rochester had an acquaintance at the UI with Professor Emil Witschi, a well-known embryologist in the Department of Zoology (now known as the Department of Biology). Upon arriving in Iowa City, Bagnara met Professor Witschi and became one of his graduate students. “[Witschi] had a very impressive program at Iowa . . . . The principal theme of his program dealt with embryonic sex determination, but specific research topics took many directions from genetics to behavior,” says Bagnara. “In my own case, I began to work with pigment cells and with pigmentation. . . . I certainly did not intend to work with pigmentation for all of my life, and, in fact, knew little about pigment cells when I started graduate work.”

During the summer of his first graduate year, Bagnara met Lou Schulze, who was also a student at the UI. They married in September 1955 in the Danforth Chapel on the UI campus. Lou graduated in June 1956 with a Bachelor of Science in Chemical Engineering, one of the first women at the UI to have earned such a degree. In August, Bagnara received his Ph.D. in Zoology. Then, in September, he accepted a position as a zoology instructor at the University of Arizona (UA) and eventually became a professor there in 1964. He spent his entire academic career at the UA, retiring in 1992. During his long career at the UA, one of Bagnara’s successful Ph.D. students was Sally Mason, the recently retired UI President.

In 2001, Bagnara was awarded the prestigious “Order of the Sacred Treasure” from the government of Japan for his long research collaboration with Japanese scientists and his support of seven Japanese postdoctoral fellows in his lab. In addition, he made contributions to the growth of pigment cell research in Japan.

Bagnara published his memoir in 2013, Unfinished Business: A Biologist in the Latter Half of the 20th Century, that details his scientific and cultural adventures. As noted on the back cover of this book, “Now retired, [Bagnara] leaves behind a legacy of discovery and knowledge. And yet, as in any life, there is unfinished business.”