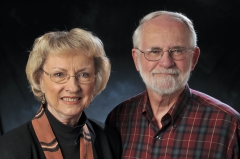 Carol is now Dean Emerita and Robert is Professor Emeritus in Integrative Physiology at the University of Colorado Boulder.

For Robert (Bob) and Carol Lynch, earning their Ph.D.’s at the University of Iowa (UI) was one of life’s lucky events. Carol had been pursuing a Ph.D. at the University of Michigan, and Bob, who had taken time off to teach, was at Ohio Wesleyan University when they decided to move to Iowa in 1967 after Bob accepted a teaching position at Augustana College. “We literally got out a map and picked the University of Iowa,” said Carol. Before they moved, the couple got married, and the rest, as they say, is history.

While at the UI, Carol and Bob joined Hugh Dingle’s Lab. Carol also worked under the guidance of Joe Hegmann at a time when having two Ph.D. advisers was rare. Bob became interested in the effects of hibernation on the reproductive system after studying it in a graduate seminar during his first year and consulted with Edgar Folk in the physiology department, who was an expert in the field.

“The faculty were not only excellent academically but very supportive of the graduate students,” Carol said. “Neither of us would have had the success in our careers without the mentoring we received from the faculty.”

Carol completed her Ph.D. in Zoology at the UI in the fall of 1971. She is Dean Emerita at the University of Colorado Boulder, where she served as Dean of the Graduate School and Vice Chancellor for Research from 1992 to 2004 and was a Professor of Ecological and Evolutionary Biology. Prior to that, she was a Professor of Biology and Dean of the Sciences at Wesleyan University in Connecticut. She is a Fellow of the Institute for Behavioral Genetics and of the American Association for the Advancement of Science (AAAS). Carol had research grants from the National Institutes of Health (NIH), the National Science Foundation (NSF), and NATO, and has authored numerous publications in evolutionary and behavioral genetics, as well as educational policy.

Bob received his Ph.D. in Zoology in the spring of 1972. He is Professor Emeritus in Integrative Physiology at CU Boulder. He also taught undergraduate and graduate courses at the University of Maine at Orono and Wesleyan University in Connecticut. He received generous grant support from NIH, NSF, and private foundations on the neural and hormonal mechanisms controlling seasonal breeding cycles in small mammals. Some of Bob’s research was completed in Germany while on a von Humboldt Fellowship.

Carol adds, “We owe our careers to the University of Iowa,” and they are honoring that with a bequest to the Integrated Biology (iBio) Graduate Program in honor of their advisers, Hugh Dingle and Joe Hegmann.