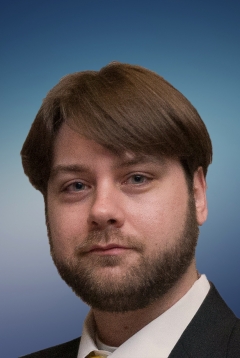 Ries has been focusing on managing the business operations of his start-up company, TranslaCare, since graduating from the University of Iowa in the spring of 2014.

An untraditional path brought Ryan Ries to the University of Iowa (UI), so it’s no surprise that his experience here was unusual.

Ries, from Sergeant Bluff, Iowa, worked in a variety of jobs, from loading packages to editing a magazine, while completing his associate degree. When Ries started his bachelor’s degree in 2011, he chose Iowa because he felt it was the best public university in the state, he enjoyed Iowa City, and he would be able to study biology and linguistics at the same time.

During his three years at Iowa, Ries was consistently on the Dean’s List and worked in Professor Bernd Fritzsch’s Lab. He volunteered with Project HOPE and the Jacobson Institute for Youth Entrepreneurship at the UI and co-founded and became president of a software start-up, TranslaCare.

TranslaCare's software product, Iconotouch, is a web-based service that is designed to facilitate communication for individuals in hospitals or nursing facilities who have speech and/or language deficits that prevent them from engaging in verbal communication with caregivers or family members. TranslaCare has received several awards including a $100,000 loan via the Iowa Innovation Acceleration Fund.

Ries has focused on managing the business operations of TranslaCare since graduating from the UI in Spring 2014. He feels his unusual path has given him time to figure out what he wants to do.

“I think that time (from his curiosity at a young age to his undergraduate research and work with TranslaCare) was essential for me in figuring out how I could pursue curiosity in a professional career,” Ries said. “I also realized that I could pursue curiosity not just for its own sake, but I could do it through a medical and/or scientific career in which I can make a positive impact on people’s lives.”