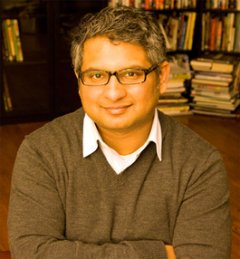 Lachke is currently an Assistant Professor in the Deparment of Biological Sciences at the University of Delaware.

When asked which medical conditions we fear the most, polling data indicates that second only to mental illnesses, we largely fear losing our sense of sight (Horowitz et al. 1997). Loss of vision can result from a functional compromise of various components of the eye. However, opacification of the transparent lens (clinically termed cataract), remains the leading cause of blindness and affects over 77 million individuals worldwide. Surgery remains the only treatment, carrying with it the risk of secondary cataract formation—an undesirable complication—especially in the elderly.

Salil Lachke, Ph.D. ’03, is an Assistant Professor in the Department of Biological Sciences at the University of Delaware. His research focuses on understanding mammalian eye development to prevent or delay the onset of cataract and other eye diseases. Lachke has developed a bioinformatics-based approach called “integrated Systems Tool for Eye gene discovery” (iSyTE) that has been successfully used to identify novel genes associated with human cataract and predict several uncharacterized genes with potential function in lens development. His research led to the discovery of a new gene associated with childhood cataracts and glaucoma and was published in the March 25, 2011, issue of Science magazine, “Mutations in the RNA Granule Component TDRD7 Cause Cataract and Glaucoma.”

Lachke hopes the insights gained from this research can potentially unveil basic regulatory principles relevant to understanding the development and maintenance of other cell and tissue types. He was the 2005 D.C. Spriestersbach Dissertation Prize winner and was a member of the Soll Lab.