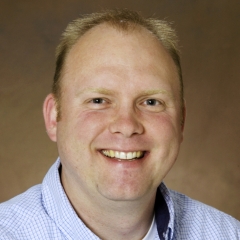 Stuart Haring is currently an associate professor in the Department of Chemistry and Biochemistry and the Interdisciplinary Cellular and Molecular Biology Program at North Dakota State University.

Haring, who completed his bachelor’s at the University of North Dakota, came to graduate school at the UI with his wife, Jodie, who pursued a Ph.D. in microbiology. Haring tackled his doctoral studies in Professor Robert (Bob) Malone’s lab, focusing on meiotic recombination. While Haring fondly remembers many department members, his advisor had the most lasting influence on him. Haring remembers Dr. Malone as demanding but loyal and caring as well.

“I believe I would have been successful as a scientist anywhere, but I also believe my experience at the UI and in Bob’s lab helped me to sharpen my skills as a scientist and educator in ways I would not have otherwise,” Haring says.

After receiving his Ph.D. in biology in 2004, Haring worked in the Department of Biochemistry with Marc Wold as a postdoctoral fellow. He and Jodie then returned to their hometown of Fargo where he is an associate professor in the Department of Chemistry and Biochemistry and the Interdisciplinary Cellular and Molecular Biology Program at North Dakota State University. Stuart, Jodie, and their dog live close to both their families and have enjoyed reconnecting with childhood friends.