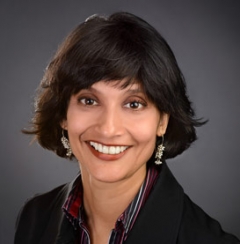 D’Souza is currently an attorney at Kagan Binder, a firm specializing in intellectual property law, in Stillwater, MN.

After growing up in the Middle East and India and spending most of her life in big cities, Tanya D'Souza was unsure about studying and living in Iowa. However, D'Souza's friends at Grinnell College encouraged her to consider the University of Iowa. At first, D'Souza did not liek the small town atmosphere of Iowa City. She described it as a "ghost town" with the dorms being the tallest buildings when moving here during the summer of 1992. But, by the end of her time in Iowa City, "you had to pry me away", D'Souza said. During her work toward both her Ph.D in Biology (2000) and J.D from the College of Law (2003), she fell in love with the comforts, accessibility, and friendly faces that Iowa City had to offer.

While pursuing her Ph.D in the Department of Biology, D'Souza worked in Chi Lien Cheng's Lab (1994-2000) studying senescence (biological aging) and sugar in the model plant, Arabidopsis thailiana. In addition to professors Cheng and Erin Irish serving as great mentors and always a source of support, there were other individuals in the department who privided assistantce when needed. Once such person, Ken Jensen, manager of the Biology Greenhouse at the time, helped her deal with aphids (plant lice), which she referred to as being "the bane of my lab work and one of the downsides about working with living organisms". During her time in the department, D'Souza was also a Graduate Teaching Assistant in genetics and plant biology and served as an instructor for the Howard Hughes Life Science Summer Program (2000).

Upon completing her degrees, D'Souza began to practice intellectual property law with the large law firm, Faegre & Benson (now Faegre, Baker, Daniels). This position gave her considerable experience working on a wide range of patents and different types of clients, such as large companies and universities. After several years in this setting, she accepted a position as Director of Research and DEvelopment at the University of South Dakota. She then worked with large companies and institutions in what she described as "a perfect mix for my background in academia and patent law" at a boutique patent firm, IPLM Group, P.A. Her clients consisted of universities and biotechnology, pharmaceuticals, medical device, chemical, environmental, and agribusiness companies. Currently, D'Souza is an attorney at Kagan Binder in Stillwater, MN.