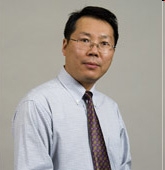 Yao is currently an Assistant Professor at the Department of Psychiatry, Beth Israel Deaconess Medical Center, and Head of Molecular Cellular Neuroscience Laboratory at the New England Primate Research Center.

In 1991 as a young physics student at Beijing’s Tsinghua University, Wei-Dong Yao attended seminars given by University of Iowa (UI) Professor of Biology, Chun-Fang Wu, and Professor Mu-Ming Poo (who at the time was at Columbia University), and became fascinated by the unknowns in the field of neurobiology compared to the field of physics. He decided then that he wanted to study Biology and specifically, the brain. Yao was offered the opportunity to study under Wu at the UI and later graduated with a Ph.D. in Biology (1998).

Being a man of simplicity, Yao enjoyed the UI for its clean and beautiful campus and the rich student life. His wife, Hui-Hui Dai, is also a graduate of the Department of Biology, earning her master’s degree in 1997.

Yao described his time in the Wu Lab (1992-1998) as “an exciting period” due to the many exceptionally talented and dedicated students who were in the department and are now leaders in their respective fields. What he enjoyed most was the Wu Lab journal club meetings held every Wednesday night from 8-10pm where participants from several Biology labs (Wu, Green, and Soll to name a few) would discuss 3-4 recent papers. “Most of the time the atmosphere was light and peaceful but sometimes it would get heated and tight because we could not agree with each other on certain aspects of the papers presented, and no one was willing to give up or compromise,” explained Yao. “The journal club was especially valuable to someone like me with a non-biology background,” he added. Many years later, “I tried to implement a similar journal club in my own lab but seemed to never match the ones I had during my years at the UI.”

Yao said he learned essentially everything he needed to be an academic scientist through his Ph.D. degree in Biology at the UI—“from the English language, scientific writing, creative thinking, and experimental approaches, to mentoring.” Currently, Yao is an Assistant Professor at the Department of Psychiatry, Beth Israel Deaconess Medical Center, and Head of Molecular Cellular Neuroscience Laboratory at the New England Primate Research Center, a major research facility of Harvard Medical School, where he has received many notable awards.