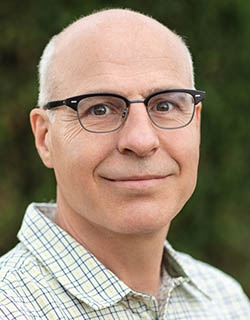 Molecular and Cellular Mechanisms of Hearing and Auditory Behavior

We use Drosophila as a model system to examine these processes. The Drosophila male, when courting a female, extends one wing and vibrates it to sing the "love song." The female and the male both hear the love song with their antennae and respond in a sex-specific manner. In Drosophila we can combine genetics with behavioral and electrophysiological methods to dissect hearing mechanisms. We have identified mutant flies that no longer respond to sound. One of these mutants, called beethoven, disrupts the normal neuronal electrophysiology of Johnston's organ (JO), the ciliated mechanoreceptive organ in the antenna responsible for hearing. Identifying the gene product of beethoven and other such genes and examining their functional roles in hearing will provide new insights into auditory molecular mechanisms, not only in Drosophila, but perhaps in humans as well.

Another goal is to further understand how organisms decipher the meaning in auditory information, and how different individuals, for example males and females, can respond differently to the same sounds. To this end we want to characterize the firing patterns in the sensory neurons in response to different sounds, then elucidate the neuronal circuitry by which these patterns are decoded in the brain, assimilated with other sensory inputs and memories, and resolved into motor outputs. These studies are facilitated by genetically engineered Drosophila strains that express marker genes in specific subsets of neurons. In our auditory mutant collection, we expect to find disruptions in genes required for the normal development of neurons in the auditory circuitry, or disruptions in genes required for these neurons to function properly in a sexually dimorphic manner.

We still have much to learn about the kinds of sounds to which the fly responds. Two main auditory components occur in the D. melanogaster love song: the pulse song and the sine song. While the pulse song and the sine song both stimulate receptive females, only the pulse song triggers males to court. Are there other roles for these defined sounds in Drosophila courtship? Could there be sounds that evoke other behaviors besides courtship, such as escape from predators? Answers to these questions, our third major goal, will provide a more thorough understanding of how an organism overcomes its environmental and social challenges. Moreover, they will give us more complete tools with which to dissect auditory mechanisms.

Figure 1 shows a male oriented toward a female and singing the love song by vibrating his wing (arrow). 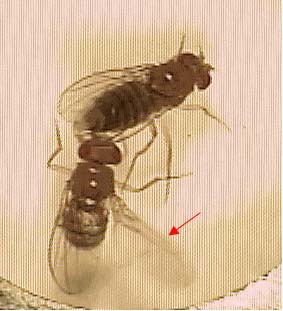