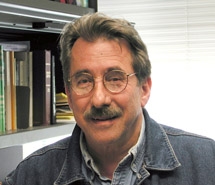 Our research focuses on three aspects of human disease. First, we are interested in understanding the role phenotypic switching plays in yeast infections. In 1987, the white-opaque transition was identified in a strain of Candida albicans isolated in a blood stream infection at Iowa. Recently, it was discovered that this phenotypic transition is an essential step in C. albicans mating, and unique signaling occurs between opaque and white cells. Opaque cells signal white cells to form a tissue (a biofilm) that facilitates mating between opaque cells. We are actively elucidating the molecular mechanisms that regulate this transition. Second, we are interested in the defects in motility and chemotaxis resulting in human disease. Using a combination of computer-assisted motion analysis techniques, fluorescence microscopy, and molecular genetic techniques, we are analyzing the role of cation receptors in cell motility and chemotaxis in the model system Dictyostelium discoideum and metastatic cancer cells. Finally, we have begun work on generating monoclonal antibody chips to identify the subgroups of the major cancers of humans and the identification of new cancer stem cell surface markers, since these cells have been implicated in cancer recurrence.