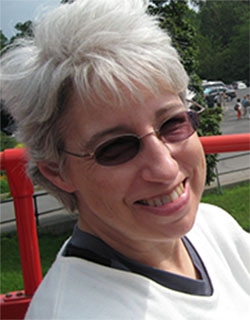 Detection and Response to Osmotic and Oxidative Stress in Saccharomyces cerevisiae.

In a collaborative project with the Erives laboratory we took advantage of the availability of full genome sequences from all domains of life and asked NOT what genes are uniquely present in animals, but instead what genes have been lost, thus re-evaluating what it means to be an animal. One gene whose absence from animal genomes is particularly striking is the gene encoding the potent amyloid disaggregase known in fungi as Hsp104. In fungi, in vitro, and when expressed in the nervous system of adult animals, Hsp104 recognizes and solubilizes diverse amyloid species associated with human diseases including Alzheimer’s and Parkinson’s Disease. The absence of this activity in animals despite its therapeutic potential in suppressing neurodegeneration led us to hypothesize that its presence might prevent the formation or maintenance of amyloids that have essential roles during early animal development. In collaborative work with the Phillips and Weeks labs, we have been investigating this premise in two ways: by expressing Hsp104 in early development, and by identifying and characterizing alternative fungal amyloid disaggregases that are not lost from animal genomes, and thus may be better tolerated during embryogenesis.

Yeast GAL11 encodes a subunit of the RNA polymerase II mediator complex and plays important roles in eukaryotic transcriptional activation. The Gal11 protein is unusual in containing long tracts of glutamine (Q). Long tracts of glutamine, encoded by the CAG codon, are especially susceptible to length changes due to replication slippage among other mechanisms. Inspection of the GAL11 locus in many natural yeast strains with sequenced genomes reveals extreme length variation in Q-rich regions, and preliminary data suggests that specific Q tract lengths may be associated with specific domestication niches (e.g. beer vs. wine vs biofuel). We have taken two approaches to investigate the role of Q tracts in generating genetic variation contributing to the adaptation of strains to novel environments. In one approach, we introduced GAL11 variants from wine yeast strains with differing poly-Q content into laboratory strains to investigate the extent to which poly-Q variation affects Gal11 function and yeast strain fitness in specific environments. In a second approach, we have been constructing and characterizing strains with synthetic GAL11 genes lacking some or all of the glutamine tracts. The study of length variation in Q rich tracts is also clinically important because numerous neurodegenerative disorders, known as triplet repeat diseases, are the result of expansion of the CAG codons for glutamine leading to an aggregation-prone protein conformation and cellular toxicity.