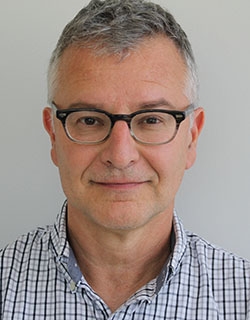 The overarching goal of my research laboratory is to elucidate the genetic basis of several human diseases/disorders, either by modeling the disease in fruit flies, or by analyzing genetic variation in patient samples.  Using fruit flies to study epilepsy, we have shown that mutations in Prickle genes cause myoclonic epilepsy in flies, mice and humans, and are leveraging the powerful molecular genetic tools in the fly to identify additional genes (and pathways) associated with the disorder, as well as developing novel drug therapies.  We use a variety of cutting edge genomics methodologies, including arrayCGH and exome sequencing, to identify etiologic mutations in humans for disorders such as cleft lip and palate, renal agenesis, spina bifida, and branchio-oto-renal (BOR) syndrome.  We have discovered new disease genes for the first three disorders, and a recombination hotspot for BOR that drives the disease process. The third project involves elucidating the function of the Myb oncoprotein in fruit flies.  Recently, we have shown that, in the absence of Myb, retrotransposition is derepressed in somatic tissues, which may help explain the genomic instability phenotypes observed in many cancers. Finally, we are using tiling arrays and next gen sequencing methodologies to study the genomics of a new model organism (Oikopleura dioica), a tunicate that has retained the basic body plan of chordates.  All of these projects take advantage of current genomics techniques to help answer fundamental questions in the biomedical sciences.

PROJECT 1:  One of the primary areas of research in my laboratory is elucidating the genetic basis of neurological disorders, including epilepsy and Alzheimer’s Disease.  We have found that mutations in the prickle gene cause seizure disorders in fruit flies, similar to those observed in mice and humans with orthologous Prickle mutations (Tao, Manak, Sowers et al, AJHG, 2011), and we are now using the fly model to perform both directed and unbiased genetic screens to identify other components in the seizure pathway, as well as elucidate the mechanism responsible for the disease phenotype. We have shown that mutations affecting different isoforms of the fly prickle gene have opposite behavioral phenotypes; remarkably, mutation of the pksple isoform makes flies susceptible to seizures, whereas mutation of the pkpk isoform actually makes the flies less susceptible to seizure activity.  This suggests that tipping the balance of prickle isoforms in one direction can drive the seizure phenotype, and consistent with this hypothesis we have been able to create an epileptic fly simply by increasing the pkpk isoform exclusively in neurons and muscles (mimicking the imbalance we see in the pksple mutants; Ehaideb et al, PNAS, 2014).  We have analyzed the electrophysiology of the prickle mutants in collaboration with Chun-Fang Wu's lab and have found that the pksple flies have a reduced seizure threshold compared to control flies.  Additionally, we have identified the cellular process that is altered in the pksple mutants.  In a recently published study (Ehaideb et al, PNAS, 2014), we show that anterograde vesicle transport in neurons is enhanced in the pksple seizure-prone mutants, and that we can fully suppress the seizure phenotype by reducing the dose of either of two Kinesin subunits, which make up the motor responsible for anterograde transport.  These data reveal a new pathway in the pathophysiology of seizure disorders, and have also provided several intriguing connections to neurodegeneration.  Since roughly one third of epilepsy patients have adverse effects from the drugs that are currently available, and since some of the more popular drugs have been associated with birth defects, there is a great need to develop safer and more effective anti-epileptic medications. We are thus using the pksple flies to screen novel anti-epileptic drugs; our pipeline from fly to mouse to human will allow us to move from one system to the other as we begin to identify molecules that promote anti-seizure activity. Although not described here, additional work in my laboratory is focused on using fruit fly genetics to functionally validate human gene mutations associated with neurodevelopmental disorders such as ID (intellectual disability) and ASD (autism spectrum disorders).

PROJECT 2:  Over the last several years, it has been demonstrated that genomic rearrangements play a role in human disease, which has in turn created new opportunities for finding the specific genes involved in the disease process. Genomic rearrangements can arise when interspersed repeat elements, lying in tandem, facilitate submicroscopic deletion (or duplication) events. Any gene caught in a genomic rearrangement could be identified by data demonstrating a change in that gene’s dosage. Tiling microarrays have been used to identify such changes using a procedure termed array-based Comparative Genomic Hybridization (aCGH). aCGH relies on competitively hybridizing to the tiling microarray a fluorescently labeled reference genomic DNA sample with a fluorescently labeled experimental sample from an individual afflicted with a disease. By comparing hybridization intensities of the reference and the experimental samples, it can be determined whether amplifications or deletions have occurred in the genomic region of interest. These changes are referred to as DNA copy number changes, or Copy Number Variants (CNVs). Importantly, CNVs are now considered common causes of human disease. aCGH has been used successfully to identify CNVs associated with a number of human diseases (for example, Kallioniemi, 2008; Walsh T. et al, 2008, Sharp et al, 2008, Ballif et al, 2007, Lenz et al, 2008). In collaboration with Drs. Alex Bassuk, Jeff Murray, Tom Wassink, Richard Smith and Patrick Brophy, we are now carrying out large-scale aCGH studies to identify causative deletions and amplications of the genome associated with spina bifida, cleft lip and palate, schizophrenia, and Branchio-Oto_Renal syndrome. Causative CNVs that we are identifying are being followed up using a variety of functional studies in model organisms to determine which genes uncovered by the CNVs are specifically involved in the disease. Currently, we have identified novel loci or rearrangements associated with spina bifida (Bassuk et al, Hum Mol Genet, 2012), cleft lip and palate (manuscript in preparation), and BOR (Brophy et al, Hum Genet, 2013).

PROJECT 3: The importance of chromatin (and chromatin structure) in controlling nuclear processes such as gene transcriptional regulation and chromosome behavior, as well as its role in epigenetics, has come to light over the last several years. The Myb complex, which we have studied in fruit flies and is intimately involved in these processes, contains the fly homologue of the human c-Myb proto-oncogene (Dm-Myb). In addition, the complex contains the following components: 1) E2F2 and DP proteins which control the ability of a cell to progress through the cell cycle, 2) tumor suppressor proteins RBF1 and RBF2 whose human homologues are required to keep cells from proliferating uncontrollably, 3) proteins that modify or move around histones required to package or compact DNA. We generated the first null mutations of Dm-Myb in flies and showed that in the absence of Dm-Myb, abnormal mitoses occur such that incorrect numbers of chromosomes are passed to cells after division, a hallmark of cancer (Manak et al, PNAS, 2002). We have subsequently shown that Dm-Myb is involved in a variety of chromatin-related processes including transcriptional regulation of target genes (Georlette et al, Genes Dev, 2007), control of DNA replication of a specialized set of genes during egg cell development (Beall, Manak, et al, Nature, 2002), maintenance of chromatin integrity (Manak and Lipsick, unpublished results), and condensation of euchromatin during M phase (Manak et al, Nature Cell Biol, 2007). We have also shown that the Myb complex binds to transcriptional start sites of a large number of genes in the genome. However, no studies to date have attempted on a genomic level to assess how the Myb complex functions in an intact animal. We are now characterizing both expression patterns and chromatin structure of a variety of tissues when Myb is either present or absent, and we are identifying genome-wide binding sites for Myb in these tissues. These studies will allow us to begin to understand the regulatory hierarchies controlled by Myb, and to determine whether Myb is regulating different targets in different tissues. We have found that Myb is directly functioning with the NURF nucleosome remodeling complex to both activate and repress target genes, and that in the absence of Myb or NURF, retrotransposons can become active and mobilize to novel sites in the genome. Ultimately, we wish to demonstrate that a complex containing both proto-oncogene and tumor suppressor proteins is functioning at the most basic level; i.e., to create the proper chromatin structure that ensures the appropriate behavior of chromosomes. We believe that alteration of these basic processes (which has global genomic consequences) can lead to catastrophic events, such as cancer and disease. Classical techniques such as developmental and genetic analyses coupled with immunocytochemistry and genomics are strong components of this project.

PROJECT 4: My laboratory is also collaborating on a project to use tiled genomic microarrays and RNA-seq to empirically annotate and characterize the genome of Oikopleura dioica. Oikopleura is a metazoan at the transition of invertebrate to vertebrate and this project is being done with the Thompson and Chourrout labs at the Sars International Centre for Marine Molecular Biology in Norway. Informing these studies, we have found through our work in Drosophila that traditional techniques to annotate genomes such as deep sequencing of cDNA libraries or in silico predictions of genes fails to reveal the entire transcriptome of a eukaryote. However, tiled microarray and RNA-seq studies can identify transcripts missed by these methodologies. We are currently mapping the transcripts of Oiko through the course of development as well as through ecological stressor experiments. Through these studies, we hope to identify nearly all transcribed sequences emanating from this genome.