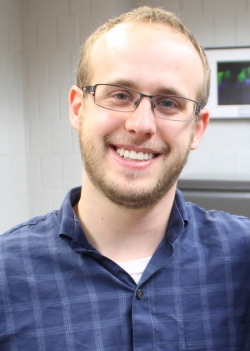 Ben's research aims to understand DNA chromosome behavior in a specialized cellular division called meiosis. Meiosis is the process by which cells divide to form gametes. During meiosis, DNA damage is purposefully created in order for chromosomes to find their partner and then separate evenly into gametes. A protein complex, called the Synaptonemal Complex (SC), is crucial for holding together chromosomes so that DNA damage can be repaired. Without the SC, DNA damage goes unrepaired causing chromosomes to segregate unevenly which can lead to developmental disabilities such as Down syndrome. Therefore, understanding how the SC is regulated may help prevent disabilities generated from chromosome segregation errors. To study this, the Smolikove Lab uses the model organism Caenorhabditis elegans, a widely used genetic model system with a multitude of genetic and cell biological tools. Using this model, Ben examined the regulation of SC assembly in two different forms. First, Ben showed that a relatively unstudied protein, FKB-6, is important for regulation of chromosome movements. This study, for the first time, presented evidence that increased chromosome movement in meiosis leads to improper SC assembly. Secondly, Ben showed that CUL-4, an E3 ubiquitin ligase is important for a number of processes in meiosis, crucial for progression through meiotic prophase I leading to proper gamete formation.

Ben was born in Arizona and raised in Illinois for most of his life. He attended Cornell College and completed his B.A. in Biochemistry and Molecular Biology with a minor in Anthropology. Prior to his attendance at the University of Iowa, he had an internship at Baylor College of Medicine in Dr. James Lupski’s lab.

Ben entered the iBio Graduate Program in 2013 and joined Dr. Sarit Smolikove’s lab later that year. During his 4½ years in the lab, Ben studied the mechanisms of regulation and progression of early meiosis. He has been a Developmental Studies Hybridoma Bank (DSHB) Graduate Fellow and is currently a Ballard-Seashore Dissertation Fellow.