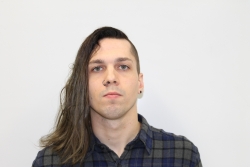 Non-native species that cause damage to ecosystems to which they are introduced are considered invasive species. Restoration of the original ecosystem after an invasive population establishes itself is expensive and difficult. Restoration is more likely to succeed when invasions are discovered early. Containment of known invasions also benefit from earlier knowledge of invaded sites. Environmental DNA (eDNA) techniques are emerging as a tool that can identify invasive species at a distinctly earlier timepoint than traditional methods of detection. J.D. is the first example of which we are aware of successfully applying eDNA to detect a new invasion of the freshwater New Zealand mud snail. This study sets the stage for further monitoring of at-risk sites to detect and control new invasions of this destructive snail.

During his time as a Master’s student, J.D. held an Outreach Assistantship with the Iowa City Science Booster Club, where he organized informal science education exhibits for the general public.

J.D. recently moved to Hawai`i, where he hopes to work with non-profit organizations in conservation, including invasive species mitigation.